Oil Pack (for gasoline and diesel) 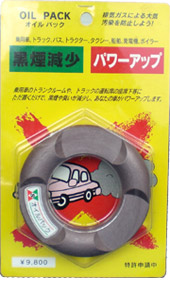 Dirt is washed off by less than half amount of the detergent that had been used before.

Unlike the hard water such as the rainwater and the river water, tap water is made as the soft water at the filtration plant. Soap makes bubble well by the soft water; however dirt cannot be washed off enough by the tap water. Therefore, a synthetic detergent and the washing soap were invented. The reason why dirt can be washed off is an effect of surface activity that is the characteristic of detergents. The detergent has characteristic that wraps the particle of dirt. Please put this white pack into the washing machine, and use less than half amount of the detergent that had been used before. The water of the washing machine will have the same effect of the surface activity of the detergent; therefore dirt will wash out enough. If it is not heavy dirt, it is possible to wash with the detergent of the amount of 1/10 or less. It can restrain the nature pollution promoted by the element of the detergent of the drain that flows into the river. 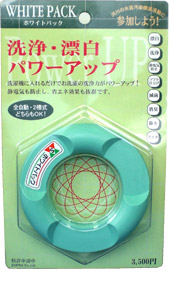 Remove the unpleasant smell only by placing it in the room

The idea of the smell by the balance improvement is that the change in density of the plus and the minus is in the density of the smell. The air freshener is often used to the space of the room and the car to relieve the unpleasant smell in the air, and when the air freshener is used, the smell of the aromatic substance is filled in the room. There is a method of adsorbing the smell by the activated carbon, too. However, it is necessary to replace the activated carbon regularly in order to maintain its' effect. This smell-pack can remove the unpleasant smell only by placing it in the room. The smell-pack controls the minus density of the unpleasant smell by raising the plus density, we don窶冲 experience the stink anymore. This commodity is proper to use at hospitals, the nursing facilities, the day nurseries, the kindergartens, and the schools, where the active carbon cannot be used. 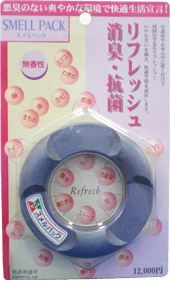 Case of the Monad Series