Case of the Water Series

Water Pack (for household use)

Remove the odor of chlorine. 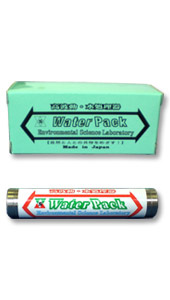 Almost no smell of chlorine

Wash and steam the rice with the balanced tap water that is controlled by the water-pack. Then, the amount of the water that infiltrates the grain of rice increases, and the taste of rice will be ambrosial. A lot of amounts of the dish detergent can be decreased by washing tableware with this tap water. It has the same feature of the surface activity effect as the “white-pack” that is used to the laundry. By mixing this balance water and bleach, the dusters and the towels can be bleached without the strong smell of chlorine. Soak the towel, clothes, and tableware for a while in the balance water mixed with the several drops of bleach. The function of sterilization and the bleaching doesn't change. However you do not feel the strong smell of chlorine unless you smell it really close.